The Comets made the transition from Class ‘B’ to Class ‘A’ this year and recently wrapped up the second seed in the upcoming Region 8A Tournament with a 15-5 record.

Their success has been in large part due to a group of five juniors including Zane Schlabach. 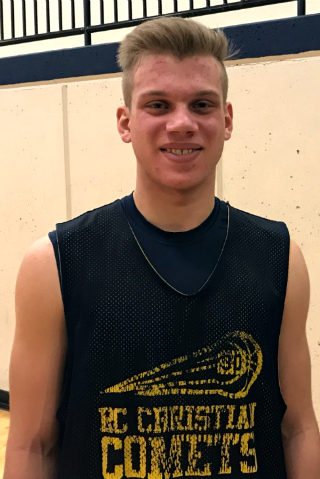 So far this season, Schlabach is averaging around 17 points per game.

An offensive spark for the team, Schlabach said he realizes that scoring is not the only important part of the game.

“His dad was a college basketball player and has really worked with Zane growing up,” Rapid City Christian boys basketball coach Kyle Courtney said. “Zane has put time in the gym. So Zane’s been a natural scorer. But he’s improved his consistency in rebounding this year. I think his defensive effort has been much better. That’s been a big thing for Zane in just that consistency this year.”

Schlabach is also the quarterback on the Comets football team and he plans to play baseball this spring for the Douglas Patriots.

But his focus right now is helping the Comets qualify for the Round of 16 and the State ‘A’ Basketball Tournament.

“That’s our goal for this year,” Schlabach said. “I think we have to come ready to play. Bring our ‘A’ game and just play hard. That’s been our goal since day one.”

Congratulations to Zane Schlabach on being named a NewsCenter1 Top Performer.