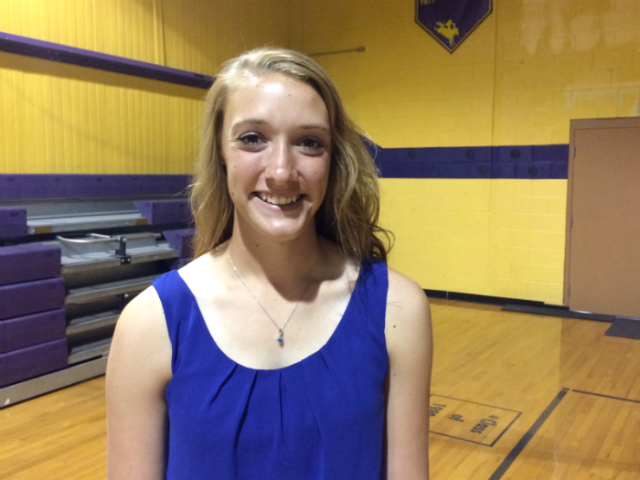 NEW UNDERWOOD, S.D. – Brianna Philipsen has been a standout athlete for the New Underwood Tigers over the past few years. In fact, the senior has excelled in both basketball and track and field.

As Philipsen begins to wind down her high school career, she can think of nothing more than to finish on top.

Philipsen, who won the 100 meter hurdles and was a member of the winning 4×400 meter relay team in 2016, is hoping to finish atop the podium again in her final state track meet later this week.

She has already qualified for the state track meet in five different events; the high jump, the 100 meter hurdles and three relays. Philipsen credits her teammates for her success.

“My freshman year of basketball, we were the district champions and that was just because we had great teammates,” says Philipsen. “My senior year, we all worked really hard in the off season. Everybody, it was wasn’t just like it was one person. Everybody showed up to open gyms and went to camps. It was just a team effort. In track, it’s kind of been the same way. We had some open gyms over the summer and we’ve just been working together. Having a bond with your teammates is really important especially in relays.”

Since Philipsen is one of only four girls in her senior class, New Underwood track coach Stacy Finkbeiner says Brianna has been a true leader for the underclassmen.

“I run my relays with three different eighth graders,” says Philipsen. “They didn’t have a lot of experience, especially last year. So going in to the state track meet, I knew it was kind of going to be a shock to their systems. So I just tried to keep them calm and relaxed and have them ready for what was upcoming.”

This fall, Philipsen will continue her career by playing basketball at Black Hills State University in Spearfish.