Seven St. Thomas More athletes to play at the next level

One of the biggest days of a high school athlete’s career is the day when they get to sign a national letter of intent.

When all that hard work, dedication, and commitment finally pays off.

Seven seniors from St. Thomas More made their intentions known on Monday.

She was also a member of the 4 X 800 state championship relay team.

In addition, Ty Trainor plans to compete in cross country and track next year at the University of Mary in Bismarck.

Trainor competed in the state cross country meet for four years in a row and finished in the top six each of those years.

He also placed at the state track meet 10 different times and has won three state titles.

Trainor will compete in several different events at the University of Mary.

Kayla Jacobson also plans to compete in basketball at the next level. Jacobson will take her talents to Mount Marty College in Yankton.

She was a member of four state championship teams and was named All-Conference Honorable Mention in 2018.

"I’ve always wanted to play college basketball and I toured it earlier this year," Kayla Jacobson said. "I just fell in love with the campus. I was able to meet the coaches and a couple of my future teammates and I just really liked it. It was the perfect fit."

Elizabeth Erlandson signed a letter of intent on Monday to play soccer next year at St. Catherine University in Minneapolis.

The senior was a member of the St. Thomas More girls soccer team that won the state title in 2015, finished fourth at state in 2016 and second in 2017. 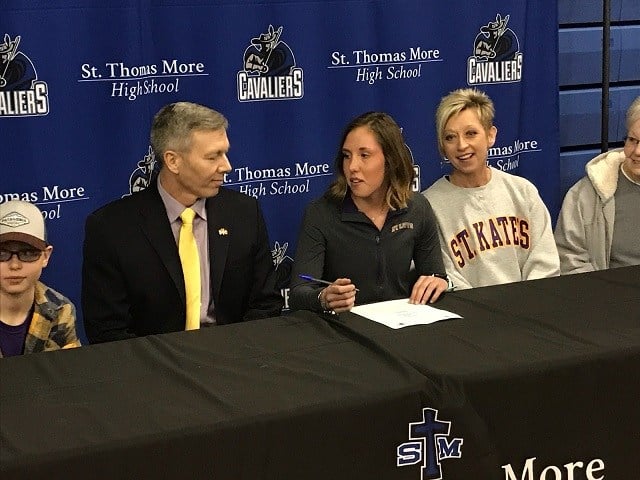 Meanwhile, Rose Kinyon is making the jump to the collegiate level and will softball at Mount Marty College in Yankton.

Kinyon, who had a .541 batting average and .575 on-base percentage, was on the Douglas softball team that won the state title in 2015.

Plus, STM senior Stone Durham signed a letter of intent to wrestle next year at the University of Dubuque.

Durham is a four-time state qualifier and holds the record for the most wins in St. Thomas More wrestling history.

Durham checked out several different schools before deciding that the University of Dubuque was the best choice.

"The coach and the wrestlers, when I went there, they really made me feel welcomed and I felt like I fit in with most of them," Stone Durham said. "What the coach has done there, just made me feel like that would be a good fit to go where I could progress."

Nevada looks for home win vs No. 5 San Diego St.