It’s the one night each year that the Officials organization honors the top local athletes, while helping to preserve both the past and the future of sports in Rapid City.

Elizabeth Schaefer from Rapid City Stevens was named the Female High School Athlete of the Year.

She earned 10 letters throughout her career after excelling in volleyball, basketball and track.

Plus, Schaefer is a three-time state champion in the 300 meter hurdles.

It was a clean sweep for Rapid City Stevens, as Cody BeVier was named the Male High School Athlete of the Year.

BeVier earned 11 letters in high school by competing in football, wrestling and track.

He led the team in touchdowns and total yards offense and finished third at the state wrestling tournament with a 40-5 record.

"Definitely my parents have helped me," Elizabeth Schaefer said. "They support me in everything that I do. When I come home from hard practices and I think why do I do all of these three sports. They just help me to just be so stressed. They really taught me a really hard work ethic. Show me not to give up and they’ve been great role models."

"All the athletes that were nominated are all great athletes," Cody BeVier said. "Anyone could have been elected for this award. I’m just glad I made it because I put a lot of hard work in through my high school life. My coaches, my parents have supported me my whole life. I’m just glad I was chosen." 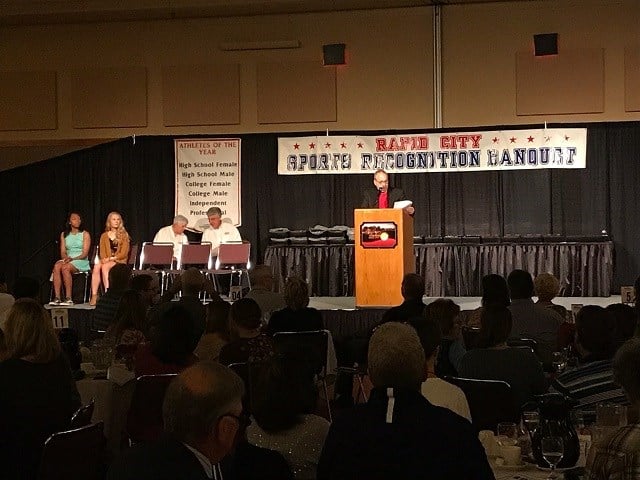 Finalist for High School Athlete of the Year

College Female Athletes of the Year

Ciara Duffy, Women’s Basketball at U. of South Dakota

College Male Athletes of the Year

Independent Athlete of the Year

Professional Athlete of the Year

– RC Stevens and St. Louis Cardinals in the NFL