RAPID CITY, S.D. – New data released by Feeding South Dakota finds that 40% of residents of South Dakota who are food Insecure may only be able to turn to charitable food programs for help.

Feeding South Dakota, one of 200 food banks in the Feeding America network that collectively provides food assistance to 46 million Americans struggling with hunger. The organization in the fiscal year 2017, secured and distributed over 13.6 million pounds of food, providing 11.3 million meals to more than 190,000 individuals in need across the state. Food is distributed from centers located in Sioux Falls, Pierre, and Rapid City through a network of over 400 charitable organizations, and 555 partner agency programs across the state.

The data released through a study funded by the Feeding America network called Map the Meal Gap 2018, is a detailed analysis of food insecurity for every county and congressional district in the United States. It is the only study that provides local-level estimates of food insecurity across the country.

The report for South Dakota reveals that food insecurity exists in every county in South Dakota. Additionally, 40% of residents of South Dakota who are food insecure are likely ineligible for federal nutrition assistance under current program requirements.

“Map the Meal Gap shares data about the prevalence of hunger in our state,” said Matt Gassen, CEO at Feeding South Dakota. “This information allows Feeding South Dakota to better understand the need as we continue to work with partners, donors, and stakeholders, to help close that gap.”

So, what is food insecurity? Food insecurity, is defined by the USDA as a socioeconomic condition of limited or uncertain access to enough food to support a healthy life. One in nine South Dakotan’s is food insecure. All counties in South Dakota have food-insecure individuals whose level of income prevents them from qualifying for federal nutrition assistance.

Overall food insecurity in South Dakota ranges from a low of 7% of the population in Lincoln County up to 26.9% in Oglala Lakota County. 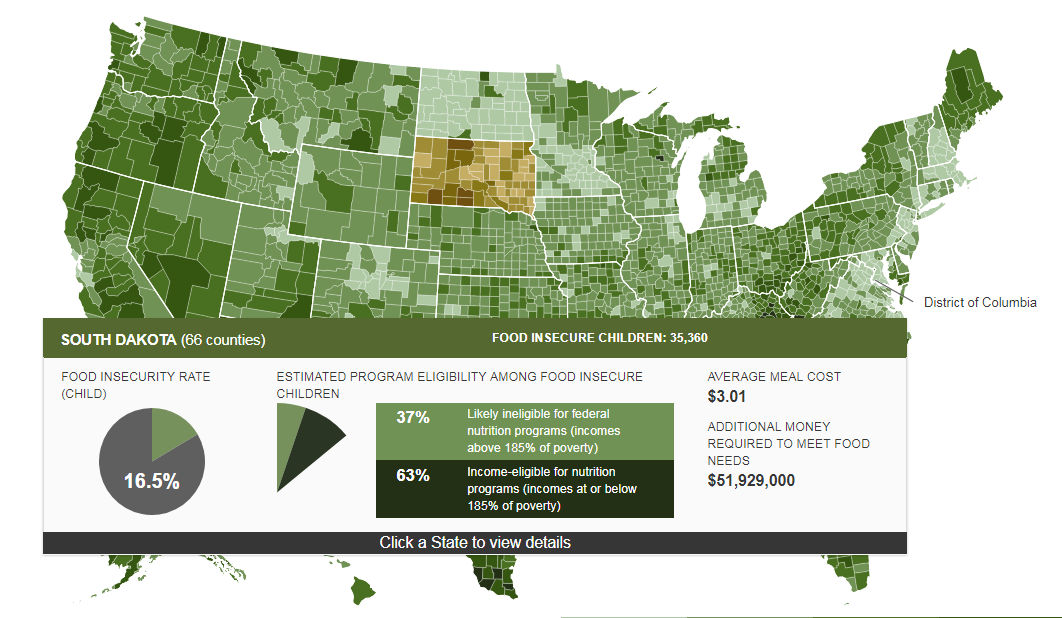 The analysis also finds that in four counties (Hand, Hughes, Lincoln, and Union) across South Dakota most of the people facing hunger are unable to participate in federal nutrition programs. In Lincoln County, 64% of people struggling with hunger may not qualify for food assistance.

The study’s findings underscore the depth of need that remains in communities in South Dakota and across the U.S., despite national measures from the USDA that indicate overall improvement.

A summary of the findings, an interactive map of the United States, and the full report are available at map.feedingamerica.org.

Dr. Craig Gundersen, Professor of Agricultural and Consumer Economics at the University of Illinois, Executive Director of the National Soybean Research Laboratory and a member of Feeding America’s Technical Advisory Group is the lead researcher of Map the Meal Gap 2018.
This is the eighth consecutive year that Feeding America has conducted the Map the Meal Gap study.
The Map the Meal Gap 2018 interactive map allows policymakers, state agencies, corporate partners, food banks and individual advocates to develop integrated strategies to fight hunger on a community level.

Map the Meal Gap 2018 uses data from the U.S. Department of Agriculture, U.S. Census Bureau, U.S. Bureau of Labor Statistics and food price data and analysis provided by Nielsen, a global provider of information and insights. The study is supported by The Howard G. Buffett Foundation, Conagra Brands Foundation and Nielsen.

The Latest: India keeps some areas shut down, others to open