PINE RIDGE RESERVATION, S.D. – A man was arrested on the Pine Ridge Reservation on several charges after tribal police found drugs inside a vehicle.

An officer with the Oglala Sioux Tribe Department of Public Safety stopped a vehicle on May 31, and a K9 alerted to the presence of drugs inside. Police found more than 2 pounds of marijuana, five hydrocodone pills and a large sum of money. 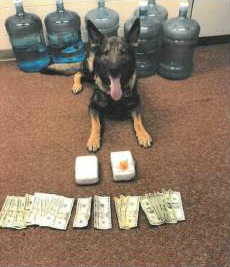 The man suspected of possessing the drugs ran away but was found nearby a while later.

The department posted on their Facebook page, saying they "will continue to work hard towards drug interdiction and drugs. The Oglala Sioux Tribe Department of Public Safety would like to thank the public for all the information they provide and thank you for your support. Working together makes a difference."