Faces in the Crowd: Orville Hengen

The Greatest Generation is a term used to describe those who grew up during the Great Depression and fought in World War II, or whose labor helped win it. The phrase was coined by onetime NBC Nightly News anchor and author Tom Brokaw in his book by the same name.

One of those veterans lives in Rapid City and turns 99 next month. Orville Hengen is this week’s Face in the Crowd.

Orville worked as machinist and was married with two kids before he was drafted to war. He placed in the Army’s 2nd Armored Division, which played an important role in the liberation of France, Belgium, and the Netherlands and the invasion of Germany. 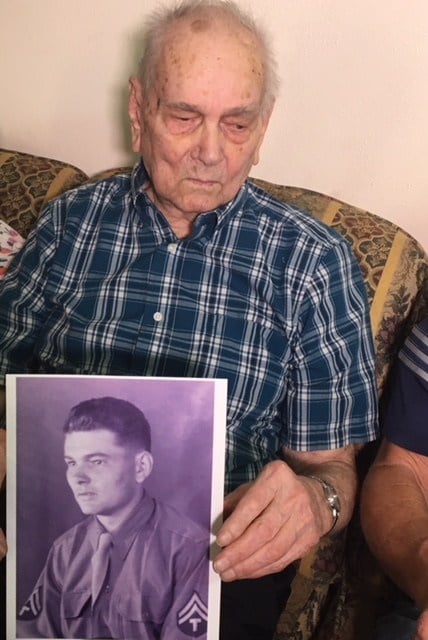 Hengen says, “I went overseas on the Queen Mary, landed in England, went over to Germany, down to France – that was all wintertime. All the guys come down in the company. They were picking out their men – who they wanted. And I got into the 2nd Armored.”

Orville has many vivid memories of his time overseas, more of them good than bad, but one sticks out.

“I was a ball gunner. That is someone who sits alongside of the tank driver. We parked, and he thought we were going to quit. So he opened up his hatch and went and got out. [He] stuck his head out. And they were shooting awfully close there, and that’s when he got shot to the head. And then they made me driver.”

Part of their mission was to also stand guard in Berlin for General Patton and the other “big shots in the Army” as Orville puts it. He saw plenty of impressionable operations.

“At night, we went clear through the town. And then we got orders to turn around and go back because they were going to bomb the town the next day. And boy, did they bomb it. That whole sky was black with bombers.”

The desire to serve runs in the Hengen family, as two of Orville’s brothers served during wartime and two of his sons served in the Vietnam War, and a daughter served in the Navy. Their love for their country came from their dad’s influence.

According to Orville Junior, “The family has pretty significant history of military service. So it was only natural, when the time came, when you are searching for things to do as young man and you haven’t decided yet – the Army is a pretty good place go to get training, get your feet on the ground and see the world is all about.”

The Hegens’ dedication to country and family are high priorities. Orville and his wife Lucille are celebrating 77 years of marriage.

The Latest: India keeps some areas shut down, others to open