In part three of the three-part series Ellsworth, Aiming High, airmen’s volunteer efforts with Habitat for Humanity is helping to give back to the community in need and take on the affordable housing crisis.

"We will never be able to repay the service that our airmen do for our country, and the blessing of them going beyond and working alongside us in our local community, can only be repaid in the joy they receive from the look on faces of the families that they serve,” said Heidi Christner, the operations manager for Habitat for Humanity.

Ellsworth airmen have volunteered and built homes with Habitat for Humanity for the past 26 years. Within the past three months alone, their original monthly service commitment has doubled, on top of doing semi-annual surge builds.

"If you’re doing carpentry or you’re putting flooring down, we have some amazing civil engineering troops,” said Command Chief Master Sergeant, Adam Vizi. “We also have active duty airmen and officers that probably have a lot of skills that they bring developing a habitat for humanity house."

Since labor costs are offset by the volunteer efforts of airmen, families can more easily afford the house payment.

"Like many places, in the country has a lack of affordable housing, and anyone that goes there and pounds nail or hangs sheetrock or any of those things, knows the only reward they are getting is internal,” said the Mayor of Rapid City, Steve Allender. “So for someone to do that and then be done with the job and move on to let another family enjoy that, I think speaks highly of their character."

28th Bomb Wing Senior Airmen, Michael Smith was surprised by the feelings he got while building a home. 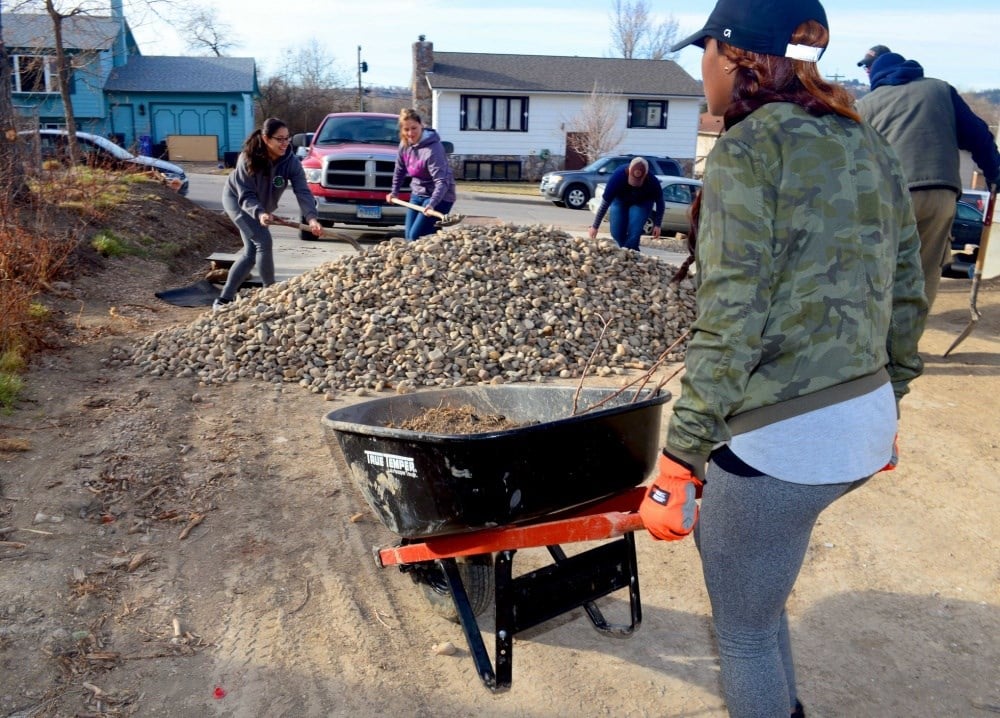 Airmen’s efforts are supporting Habitat for Humanity’s vision to live in a world where everyone has a decent place to live and to give families a chance to build strength, stability and self-reliance.

"Just carrying over into developing something for someone, that you may not even know but you’re doing it for the good of humanity, and you’re bringing your skills and you’re resources and all the things as an active duty airman, that you would expect out of a professional, to carry over into volunteering for something like that,” explained Vizi.

In some cases, the airmen volunteering work alongside the families that will receive the home they’re building.

“Everyday I drive to work I get to see the people and the houses that now their kids are playing in the yards, so it seems like if you’re living there, why not help improve it a little bit,” Smith expressed.

"I love volunteering for the local community, being from South Dakota I love to give back, and just getting out and seeing all of the different types of people and different ethnicities, and diversities, really makes it special for me," Wohlwend said.

An average Habitat for Humanity home costs about $100,000, and volunteering to build it goes along with airmen’s second core value: service before self.

"It also offers them the opportunity to get to know our community a little bit better, and gives them a way to get engaged in our community, and serve other people locally,” Christner said.

Ellsworth airmen don’t receive awards for the work they do, but choosing to spend their time giving back, once again proves the point that Ellsworth airmen are aiming high within the Black Hills.

"It’s important to recognize Ellsworth air force base and the men and women that make it what it is,” explained Allender.

Vizi continued to tie in the entire three-part series, recognizing all of the work his airmen do for the community.

"We have got some amazing people on this base, folks that go forth and do great things, build houses, coach tee-ball, go and volunteer for every and any function that goes on in the surrounding community."

On behalf of NewsCenter1, we salute and thank them for aiming high.

SD Board of Regents proposes revision to transfer policy